Tuesday was Roald Day Day, as is every September 13th.  Had he lived to see the day, it would’ve been his 95th birthday.  I’m a big fan of Dahl’s.  Not necessarily his children’s work (which can be dark at times, no doubt) so much as his short stories.  My favorite is probably “A Lamb to Slaughter,” a nasty little piece about a woman who murders her husband with . . . well, that would ruin the ending.

Years ago I watched a documentary about Dahl’s life.  I can’t remember if it was on PBS or some cable channel; I can’t seem to track it down.  As beloved a figure he was to generations of British and American school kids, his own children found him aloof and emotionally distant.  He was also quite the spy and ladies’ man during WWII, as is recounted in the book The Irregulars.

Earlier this week I came across an articleI wanted to share about Dahl.  He wrote a lot of his work in a small shed behind his house.  The Roald Dahl estate is trying to save that cottage and make it a permanent fixture of their Dahl museum.  The price tag is around $800K, which is pretty steep to move and restore a shed. 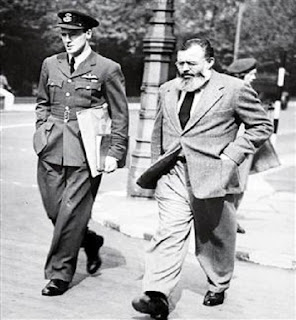 Roald Dahl with, I believe, a young Santa Claus