Last week a 91-year-old boy died:  his name, Ray Bradbury.  His was a world populated with dinosaur safaris and sinister carnivals, murderous newborns and robot grandmothers.  The obituaries are calling him a science fiction author, but he penned far more than sci-fi.  He wrote horror, fantasy, mystery, literary stories, essays, screenplays and poetry as well.  Bradbury’s version of sci-fi was science fiction rather than science fiction, which may explain why he achieved a wider audience than more technical writers like Arthur C. Clarke or Isaac Asimov. 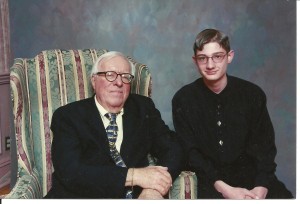 This photograph was taken in early 2000, so I would’ve been fourteen or fifteen years old.  Taken at the after-party of the Fahrenheit 451 premiere (the theatrical version) staged by the University of Akron.  This was shortly after he’d suffered a stroke and lost a lot of weight, the reason he appears so gaunt.  Many attendees brought grocery bags and suitcases full of books to have signed (which I’m sure you can find on eBay this very day).  The only book I wanted autographed was my dog-eared copy of “The October Country.”  The stories in that collection, his first book, knocked me flat on my ass, particularly “The Jar,” “The Small Assassin,” “The Crowd” and “The Scythe.”

At that time I’d been writing for about eighteen months and had only just started submitting stories for publication (without success).  Talking to Mr. Bradbury about writing was a huge shot in the arm for a nascent author like myself, and I sold my first short story to a pro-paying anthology a few months later.

Some rare genius is so inspirational that it draws other talents to it, like moons orbiting a planet; the gravity is simply too great, the pull too strong.  In terms of speculative fiction, Ray Bradbury was a gas giant, the Jupiter of our literary solar system.  Most writers are fortunate to be remembered after death for a single short story, maybe one classic book if he or she is very lucky.  Bradbury wrote no fewer than four such novels, plus dozens of short stories that will be anthologized for decades to come.

Here’s probably the best obituary that I came across, in his local newspaper of the LA Times.