Do I Have to Draw a Diagram? 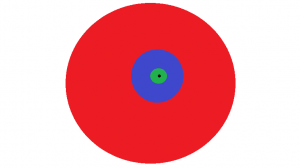 So what is this object?  Some sort of horrible alien eyeball?  Perhaps a multicolored breast?  No, these are your odds as a writer.  This graph isn’t perfectly to scale, though it serves my demonstrative purpose.  I’ve always taken Sturgeon’s Law to heart, that “ninety percent of everything is shit.”

Hence a diagram of the Law in action.

Now let’s assume the outermost red circle represents everyone who has written a book.  To make these numbers nice and round, we’ll say one thousand people finish what they start.  (We’re going to ignore those who say they want to write a novel yet somehow never get around to doing the work.  A circle that size wouldn’t fit in this space.)  Most of those books are gonna be pretty terrible by default, especially the first-time novels.  But at least the project’s completed, and that counts for something.  Good for those folks, pop the champagne in celebration.

The next circle (blue) comprises those who’ve written a pretty solid book.  This would be about a hundred decent novels, as per the Law.  Some first-time novelists in there, no doubt, but more than likely writers who’ve been to that rodeo before.  Doubly great for them, pop the champagne and light a cigar.

Now the green circle’s made up of those who actually sell that novel to a Big Six publisher.  They’ve gone through the query-go-round, probably retained a literary agent or miraculously landed the book through the slush pile.  Of our original thousand, we’re down to ten.  Pop the champagne, light a cigar and kiss the wife.

See that black dot smack in the center?  That’s the one book that actually makes the publisher some cash.  I’m not talking about breaking even, or earning out an advance and posting a tidy profit.  Serious money.  The kind most bestsellers can’t touch because the author’s advance was simply too large.  These are pop-the-champagne-light-a-cigar-kiss-the-wife-and-sacrifice-your-first-born numbers.

Maybe you’ll disagree with my numbers.  Personally I think they’re a touch conservative.  I believe the odds are worse than that in this economic environment.  And they’re likely brighter for non-fiction over fiction.  Since I write novels, we’ll stick with that.

The advice I’ve seen bandied about recently, usually when another writer’s first book comes out, is that the author is wise to spend his or her entire advance on marketing.  Promote the hell out of the book and pray it sells enough copies for the publisher to justify making an offer on Book 2.

Does this strike anyone else as being completely batshit insane counterintuitive?  That’s a slippery slope that leads straight to the poorhouse.  What happens when (if) Book 2 comes out?  Do you also spend that advance check to ensure you can publish a third book?  And when Book 3 is on sale, you piss away all your money for a shot at Book 4?

You see how this is an exercise in Sisyphean futility, right?  The whole of your career spent chasing a paycheck that will never come.

So how does this fit with the current changes to the publishing industry?  E-books will allow more writers more opportunities to make more money.  Instead of that ever-shrinking pinprick at the heart of the chart, e-books will widen that aperture.  Soon anyone who writes a solid book will be on even footing with the vast majority of Big Six authors.  Rather than one person in a thousand making decent money, there might be a hundred (the difference between the black and blue circles).

If ninety percent of everything is shit, this gives that other ten percent the means to achieve success.  Welcome to the digital arena:  your odds just improved a hundredfold.